I think we would all agree to call the obsolete line “behind a great man stands a great woman” off. With almost-equal opportunities here and there, ladies who could not make it to the top must either be: 1) not qualified, 2) not hardworking enough, or simply 3) not that brave to let herself lean in. Sorry to break the truth down to you, but we shall all deal with it somehow at the end of the day.

That being said, I think it is fair to shift our admiration from power people (individuals who happen to be talented and luckily achieve stuff while not letting their spouse to get on their way) into power couples: a man and a woman, both of whom involved in a(n arguably healthy) romantic relationship and independently hold high-level, influential careers.

There’s a number of reasons to why power couples are more awesome than power people:

Among many, these are the top 5 power couples of my pick (some of which are fictional):

“I love that woman. I love her more than sharks love blood,” Frank told us once.

The word ‘romantic’ might not fit them best—if anything, their marriage is mostly platonic. But I swear to you there is something inexplicably intimate in those looks they exchange every now and then throughout the series. Frank, a Democrat with big ambitions (he went from being a congressman to vice president in just one season) and Claire, a cold president of a non-profit organization, makes a perfect combo for any political geeks. They are not particularly ‘decent’—together they manipulate the people around them to grab influence and prestige (although Frank orchestrated most of the work) and they might be united merely by their common hunger for power but I think it makes their relationship even more profound and realistic.

In the same realm of politics but the real version of it, there’s Power-Sunstein duo. Started off as a journalist, Power is now the ambassador for United States to the United Nations. She won a Pulitzer, graduated from two ivy league schools Yale and Harvard, as well as served as a professor at the latter. In 2008 she met Cass Sunstein when they both helped Obama’s campaign. Sunstein then worked for the White House Office of Information and Regulatory Affairs and taught at Chicago’s Law School for 27 years. Despite getting married to a divorcee when she was 38, Power (who, if you notice, retains her name) seems to be very happy, and they’re now both overjoyed with two kids. Just imagine all the insider’s news and high-level gossips they might be discussing in the bed.

3. Will McAvoy and MacKenzie McHale

Is it just me or are awkward relationships cute? If you watch Newsroom, you would probably agree that McAvoy and McHale’s under-the-table fondness for each other is just adorable. If Frank and Claire has that indisputable connection, I cannot exactly speak the same for this couple. Instead of trust or overflowing affection, their relationship is full of doubts, anger, and disappointments. That and my hunch about how Aaron Sorkin set them up with similar names aside, I love how they both worship the true goal of journalism i.e. to educate American people through relevant facts and stories. In News Night, Will acts as anchor and managing editor, while MacKenzie was invited back as executive producer. Although they fight a lot on the surface, deep inside, they share the same idealism of what journalism should be, and nothing could tie two people stronger than that. 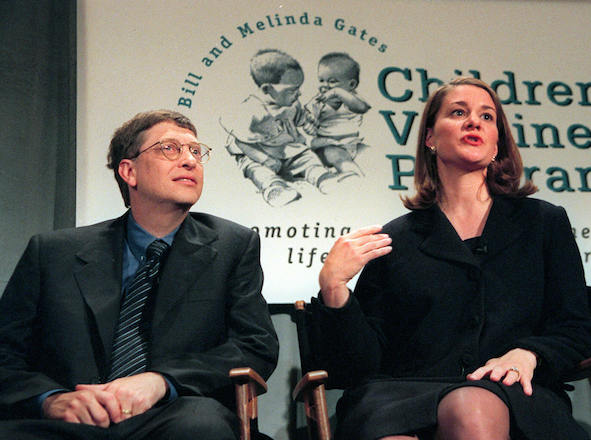 The billionaires who save the day would probably be how we call them. Melinda, hired by Microsoft in 1987, met Bill four months later when they were seated next to each other at a press event in New York City. Since the day they got married in 1994, Bill and Melinda have funded countless projects in the domains of health, education, as well as global development in general, creating tremendous changes here and there. It was all kicked off when Melinda shared her travel stories to Bill, explaining how women and men in Indian villages suffer. Today, their joint leadership has given billions on helping individuals in need in various parts of the globe. How blessed, don’t you think, to have matching vision (that is also noble) as well as the resources to actually make it happen?

Enough said on this one. Both possessing sharp brains—essentially what it takes to lead the United States—they might as well end up being the first president-president couple in the near future. (Don’t jinx it. We’ll never know.) Looking at the picture from their youth time and the fact that they’re now married (still, despite the Lewinsky scandal) with Bill declaring his support if Hilary runs as the 46th, you sort of wish you were one of their college friends who said, “I saw this coming!” But no, darling, nobody saw it coming. One could only hope.

Okay. Maybe, just maaaybe, love ends up in Disney castles and still deserve to have that ‘power couple’ title. I mean looking at this one, it’s pretty singular, isn’t it? He’s the Duke of Cambridge, she’s the Dutchess—and they both live up to their names. It makes sense that an article once called them, ‘flawless royals who handle scandals with class’. Their power comes from the English monarchy, but it doesn’t mean they don’t work for for it.

I would love to also include, of course, Sherlock Holmes and Irene Adler. Remember that part of the book where Watson says, “For Sherlock, she has always been the woman.” I think to have found an equal, the way Sherlock found Irene and the other six men and women above found theirs, is the most rewarding experience one could ever have in their life.

(Let alone actually living the rest of your life with them.)