Among the most worrisome people I know are writers—yours truly included.

First, they (we) worry about an issue—say, Iman aims to maximize youth involvement or Alanda and her noble idea of dream power. Second, they worry if the audience will actually get their message right—Marx is the least Marxist person on earth, remember? The published ones worry if their books can’t get to the second print because the public are simply not interested in buying them. Then they worry some more—about possible rebuttals, the kind of language they should’ve used (Why the hell am I writing this post in English if most of my readers are Indonesian?), the gender of diction that will sound best (Shouldn’t it be more cheerful? Would this bore my visitors?), and the list goes on.

This tributed post, my fellow writers, is an antidote to the endless stream of concerns that surround us (both professional and amateur) writers: the story of what actually takes place in our very primitive stage of writing.

So earlier this week I started reading Goenawan Mohamad’s Indonesia/Proses. Despite being greatly impressed by his eloquent elaboration on the profoundly misunderstood concept of identity, I will highlight something else—my most favorite part of the essays, in fact:

I then took the liberty to create this spectrum of writing personae: 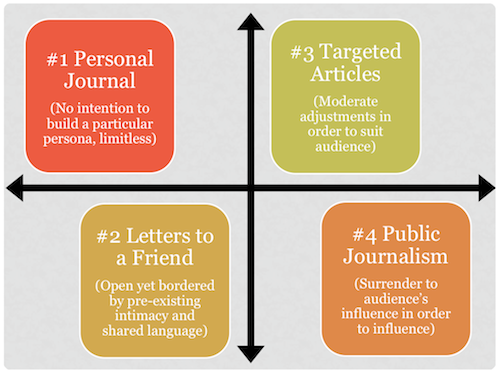 Basically, Goenawan postulates three distinct examples of writing personae (Anne Frank’s diary, Kartini’s correspondence with her Dutch friend, and a journalist’s report)—but then I added a complementary element of targeted articles. Here’s how they’re different from one another, in his own words:

Letters to a Friend

Briefly (yet articulately) explicated in less than two pages, this theoretical framework helps me understand that it is okay to be different personae in different writings—because there is no right or wrong in pouring our thoughts into words; what matters is you feel comfortable in doing so. I myself have three (or probably four?) separate blogs where I express myself dissimilarly. Because hey, what is writing if not a personal ritual and powerful remedy to the restless minds?

Here’s to being more open to who we are and what we like writing about the most.

Once upon a time, there lived a ridiculously ambitious girl who often took responsibility for things she wasn’t even sure if she was capable of. Despite side-effects in the form of temporary insanity and occasional stressfulness, she actually enjoyed what she was doing and told everyone about it. She somehow managed to thrive and emerge as one of those people-to-go-to; which consequently added up a series of even more workload every now and then—that she gladly accepted.

Some three years later, entering her final stage of university, she realized that it was time to give up. The expiry date to ‘good-productive-days’ has been bamming on her door, and the alarm to ‘get off your horse and go to the balcony to enjoy the view instead’ started ringing. “Alright,” she thought, “what can be so bad about spending more time for myself? I can finally read those books, blog on a daily basis, and have some fun!” These were several ideas that her friends offered and something she expected (hoped) to be true.

Two consecutive months of being a retired student, however, led her to three surprising discoveries: 1) she was barely happy throughout the beginning of her pension period; 2) she hardly wrote anything other than her amateur thesis; and 3) she knew for a fact that a big part of her identity was missing.

But of course, there’s no point in sharing merely the sad part of the story. This bounce-back post is therefore an attempt to highlight the lessons-learned and positive sentiments instead (she happens to believe that she’s not the only person who’s going through the challenging phase of being a useless individual and wishes to move on). So here we go: 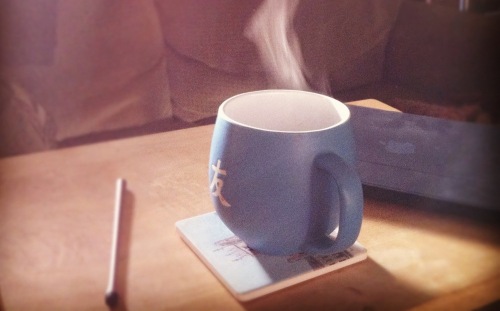 1. There Is No Such Thing as a Cure to Post-power Syndrome

You see, the prompt emptiness that (paradoxically) fills up your days will always remain there. Some of your peers might suggest other replacement activities such as hiking, singing, shopping (I mean—who doesn’t love it) but hey, organizational hecticness that you usually subsribed to has this ‘continuous’ element that makes up what it is. As much as new rituals or hobbies can distract you for a while—it would take something more permanent to completely restore you back to a good shape. So the only way to deal with it when you can’t find a new place to be masochistic is this: let go. You just have to appreciate all the extra time that you have and carefully avoid being boring in between.

2. You Get to See Things You Previously Did Not

It might sound and look very bad at first, but being idle actually bestows you this sort of superpower to observe even deeper than what is observable. You begin to realize what people are implying behind their statements, you know what it takes to be a true friend, and you become conscious about the people who really care about you. You also understand how some colleagues actually don’t hate you but simply feel threatened, while some others have no feelings at all notwithstanding how much they enjoy flirting with you.

On a more negative note, however, you and your retired friends tend to chat (a.k.a. gossip) about one another—not because you’re mean, of course, but you’re just running out of topic to discuss about. The usually fruitful discussion on ‘how are we gonna get extra 20 million in just a week’ or ‘what concept of event can work best for this situation’ has to vanish and gets superseeded by those of ‘why is this person doing this and not that’ or ‘shoot I envy her for blablabla’. Futile and shallow, but it might as well be part of being a sociable human being.

3. You Become More Sensitive and Grateful

The small memories that you usually toss away in order to give more space in your brain for functional knowledge and pragmatic information, now become golds that you gladly treasure. You munchscreen morning greeting from an old fellow, thank a friend for a nice massage that they give out of the blue, or an afternoon discussion over a glass of green tea. You…act more properly to the guys who treat you well—not because you desperately need a boyfriend now that you have a lot of time to waste with, but more because retiring means switching on that ‘human’ button at the back of your head. Cheers for becoming a mortal with emotions.

At last, you spend enough time at home. Your brothers don’t hunch in your presence anymore, you get into one of those long conversations with your father, and (this one takes an extra effort) you can help your grandmother bake that red velvet cake you never had a chance for before. Those Modern Family episodes you were somehow familiar with commence to eventuate and you can truly have a hands-on experience on them.

Wait…okay. This last premise probably only applies to me, but seriously being jobless makes you aspire for new stuff (and this video does not help). For some people it probably translates as up-to-date shoes, bags, or set of clothes, but all I need is some 5-to-10-year-olders whom I can play silly games with. I guess for the time being I should feel content with just hunting novels.

That, my friends, conclude my Tale of a Retired Student. Hope you feel entertained and somehow-inspired by it. Old students unite!

P.S. Putting my preference to the original storyline aside, I think Benedict Cumberbatch is the coldly-warm kind of Sherlock Holmes that Sir Conan Doyle would’ve actually been delighted for, although he’s too good-looking—not that I’m complaining. HAHAHA.