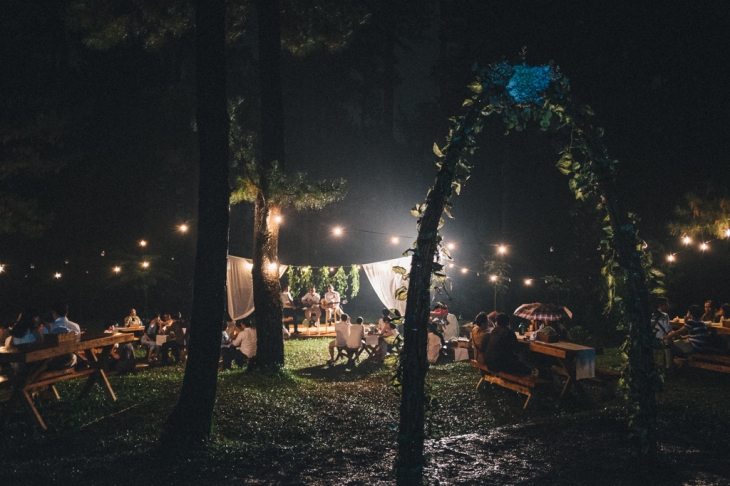 Nobody thought I would’ve tied the knot at age 24—yours truly didn’t either. It seemed too early, rather rushed, and surprising. But as Nassim Taleb points out in The Black Swan, regardless how much we’d like to suppress it, unlikely events take place all the time and almost always, they are the ones that yield in massive consequences. It also observes that, upon discovering an outlying phenomenon, humans would tend to frantically search for a simpler explanation—a rationalization that would ease their anxiety about what weird thing just happened. Love, fate, momentum? And yet when you look closely, it really is just a random occurrence. Our wedding was, in itself, a personal-scaled black swan.

Translation: I did not see it coming.

The universal formula had always been that girls with ambition wouldn’t—shouldn’t—settle down so early. The less universal formula is that there’s a laundry list that has to be ticked and unless a perfect match is found, one shall never stop looking. Being in our early 20s, we still had a long time to go, and Wikan hardly fit in my then set of criteria, but here we are, married—for 20 good days.

The truth is: we figured out early on, that we’re not huge fans of being away from each other. Especially when it involves a distance of over 23 hours of cross-oceanic flights and 12-hour difference, which was what would’ve happened had I started my master’s program next month alone. We’ve heard the opposing arguments: temporary separations could make hearts grow fonder, and if anything, it would’ve been a legit test to how strong our feelings were.

Nonetheless, we’re also aware that it would result in humongous, unnecessary pain and loneliness. Some can work out long distance relationships, but why do we have to go through the same agonizing drill for two solar cycles when there’s an obvious remedy in front of us?

Not to mention the imminent the risk of growing apart—had we led separate lives, every day we would’ve met different people, exposed to potentially conflicting values, and constantly develop new understandings that might not be as easily synchronized the way we are able to do it today. Sure, Skype calls could help, but there are obvious limitations.What if your other half is facing a hard time and you couldn’t be there for them? What if you stop caring? Naturally, if there’s a way to mitigate that, we just had to take it. Now we’re legally bound to live together, to move across continents, time zones, and languages—nobody could forbid us to.

For any two people who just want to be there for each other in any possible circumstances, who dream of not only growing old but also growing up side by side: getting married feels like being granted the ultimate visa. You simply win more by obtaining it sooner, not the other way around.

As for the checkboxes, Alain de Botton writes this eye-opening essay about why we will keep marrying the wrong person, which basically sums up the story of how Wikan has drastically changed the way I looked at relationships and, well, marriages. That it is more about making the effort to meet halfway than hunting for the person who is already sitting on the right spot from the beginning:

Lastly, there is also a good chance that both of us slightly see this whole marriage thing as, the way Ben Laksana put it, a ‘rite of passage to freedom’. That signing three times on the sacred pages of ‘marriage book’ would disarm our parents and family from the kinds of justifications that they could use to govern our lives, or force their values onto ours. Don’t take it the wrong way, however; we love both our parents and they are great, but being able to decide for ourselves and gaining more independence to do so is one of the things we look forward to. Please go read the entire piece for more on that topic.

[In case this is not what you’re looking for, the also-honest-but-more-romantic reason is parked on another lot. Hahaha.]

To be continued to Part II for more thoughts on the procedures and weddings themselves.