Breaking news: I’m a little afraid of getting stuck in the adulthood trap of being boring. Thankfully enough, I’m not yet there—I’m still greatly able to take pleasure from writing fictional love letter series on my other blog lately. One of them (To Philosophy, from Religion) actually embodies what I’ve been meaning about ‘presenting a non-fictional notion through fiction’ so if you happen to enjoy Conundrum of Paradox, that piece might as well amuse you. Although, as weird as ‘enjoying your own writing’ sounds, this one is my personal, self-written favorite. 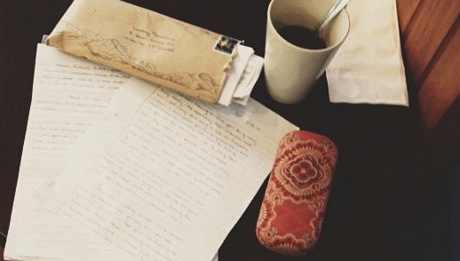 This post, by the way, will cover the rather unemotional fragments of love letters:

1. It Started with the Princes and Princesses

Interestingly: if we go back to visit the earliest generation of mankind, we would discover that the existence of affection toward another human being did not really involve a piece of paper (papyrus was only invented long after the first homo sapiens felt attracted to one another), let alone writing it down. No, ladies and gentlemen, love letters as a platform to express emotions were not popular until, what, late 12th century or something, when parchments and quills become one of the traded goods. The first individuals who put this into fashion were, I suspect, the royal people—mainly because someone from the lower class wouldn’t have possibly been able to afford it.

Quite reasonably, many of the most important phenomena in history were recorded by, if not triggered by, love letters. Long before youth started romantic conversations through trivial text messages while finding slots to flatter and finally ask their counterparts out, our Sultans and Putris and Gubermens sent letters—beautiful, lengthy letters—to write which they needed to actually sit down and take a couple of hours before sending them in a sealed envelope. Slipped between these handwritten, fondly sentences, were plausibly information on their kingdom’s latest development and the economy of their people. I recall there was a book about it—Love Letters of Great Men or something?

Today, unfortunately, we bother not spending more than 10 minutes to compose a text-formed message—we are used to limiting our elaborative capacity to short emails, less-than-140-characters tweets, or even less through real-time chat services.

One of the main reasons why I think I belong to the 20th century is my ridiculous enjoyment of writing long (and by ‘long’ I really mean ‘long’) emails—possibly a consolation price to my not being able to write long letters on real parchment pages.

Remember one of my old posts assessing Goenawan Muhamad’s theorem of a spectrum of author’s personae, triggered by different forms of writing? He mainly argues that an open article for the public captures a different personality from what a personal journal or a private letter does.

To reiterate how they are different from one another:

That’s what I admire the most about letters—especially love letters: they invite a brand new writing persona that wouldn’t have been known at all otherwise. On top of that, it is far more exciting to swim into the happy thoughts of people in love than reading the story from an outsider audience, 3rd person point of view, or simply knowing exactly what’s going on inside their head from a
1st person’s perspective.

Instead, being a reader of letters means putting yourself on the shoes of the actual addressee,
having fun assuming these letters were written for us, or visualizing how the writer and receiver correspondence with each other in the real world.

Because who does not love reading Darcy’s letters to Lizzy, really?

3. The Best Are the Most Honest Ones

Do you have to be in love to write good love letters? Yes and no.

Trained writers, who develop an instinct to see the beautiful side of almost everything, tend to find it easy to fall in love. Whether or not the feeling is real, is another matter (a very tricky one to prove, too), but such perspective is enough to produce nice, heartwarming love letters regardless.

Writers with shorter airtime might possess a narrower storage of vocabulary thus find it hard to make an enjoyable, descriptive letters—but this does not make their feelings any less beautiful. In the end of the day, I think the best love letters are the most honest ones—it being short or long, grammatical or not, does not really matter.

4. Everyone Has a Secret Yearn to Write One

Sometime during the Lebaran holiday, I impromptu-ly came up with this Love Letter Series holiday project. It started with Fadlan Mauli’s deliberate act of posting a love letter with a similar tone to my earlier series—and I thought, “Wouldn’t life be a little nicer if more people write love letters—to strangers they meet on a train or friends believing in different gods?”

I believe that people need to know—no, they need to understand and answer their natural call of expressing affection through words. They need to dwell in the hardship of finding the adjective to describe how the person sitting next to them means so much, that it is okay to let them know how they make us  feel or become. That it is relieving to expose that tiny vulnerable part of us that is inevitably there.

Surprisingly, the project received a very warm welcome with over 60 submitted letters and 19.000 views throughout August. This just makes the case even stronger: that each of us has that undeniable emotional spark inside, no matter how hard we try to ignore it. I am so happy to have, among others, Ryan Adriandhy, and many other unexpected names (who wouldn’t otherwise be writing love letters) also participating in this project. Browse through those awesome love letters here.

I may or may not have to give some credits to Sarah Kay’s spoken words series (watch one From Toothbrush to the Bicycle Tire—one of her greatest pieces), as well as Aan Mansyur’s proyek surat cinta (which I just learned recently). Both of which are awesome.

Feelings are like words: just because you don’t know about them does not mean they do not exist—sometimes even in your own language. I’d like to think that writing love letters is like looking them up in dictionaries, exploring the undiscovered pages, and realize that you might have been wrong about how you (think you) feel all this time.

P.S. I’ve been enjoying the editing process of Love Letter Series holiday project so much I find it hard to decide if I enjoy being a writer more than being an editor.

P.S.S. In case you haven’t: write one, it’s deliberating.

P.S.S.S. Pramoedya Ananta Toer’s Buru Tetralogy and Ayu Utami’s Bilangan Fu are two over-the-top examples of how fiction can be very, very powerful in sending thought-stimuli. (Not that you did not know about this.)